Buying a brand new high-end car this 2016 certainly has its advantages. These cars are usually equipped with a massive screen serving as the main infotainment hub. If the car has built-in GPS (and it should) too, it is possible to launch the car’s built-in navigation software too. These apps are really smart depending on the car model, may even surpass some of the GPS navigator systems you can buy separately. This is the new looming threat GPS manufacturers face and you can’t forget about the continuing smartphone push. This is why companies like Garmin needed to come out with a bang this 2016 and it looks like the company did just that by announcing a whole new lineup of GPS devices that are meant to succeed the more familiar Garmin nuvi family. The Garmin DriveSmart 70LMT is just one of the devices leading this new movement. 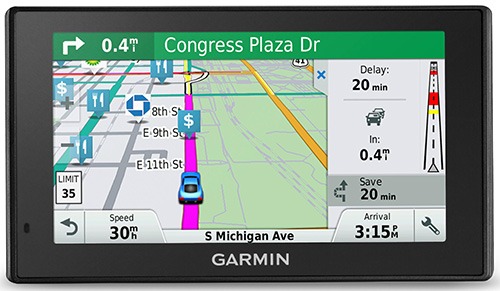 About the Garmin DriveSmart 70LMT

The Garmin DriveSmart 70LMT is the only new 7-inch model that Garmin announced in January 2016. It isn’t exactly the most advanced model since the Garmin DriveAssist and Garmin Drive Luxe come with extra features (but no 7-inch variant) but it is still a technological breakthrough when compared to the previous generation devices.

The design of the Garmin DriveSmart 70LMT really shows that it takes a lot of the DNA of the recent Garmin nuvi devices – rectangular, sleek and minimalistic with no visible buttons on the front bezel. It looks pretty massive when mounted and it is not possible to use it in portrait simply because landscape mode should be sufficient given the size and 800×480-pixel resolution. If there is a railroad crossing up ahead, the DriveSmart 70LMT will recognize that too and provide the proper alert. For longer trips, the Garmin DriveSmart 70LMT may also sound off a fatigue warning suggesting that you take a break at one of the rest areas indicated by the map.

The new Drive and DriveSmart devices are centered around providing more active assistance as you head towards your destination. For Garmin nuvi devices, that normally meant basic turn by turn navigation with the occasional alerts if you approach a school zone. The DriveSmart 70LMT is smart enough to detect upcoming sharp curves and changes in speed.

If you are willing to settle for a smaller 6-inch model, you could get these features in the Garmin Drive model. However, the DriveSmart version is an essential pick if you need the built-in Bluetooth. Like many other GPS devices with Bluetooth, the Garmin DriveSmart 70LMT allows direct pairing to a smartphone so you can place or answer phone calls and talk to a person hands-free. But for the DriveSmart 70LMT, the wireless capabilities are a little bit smarter. There is a special Smartphone Link app that you can install to your smartphone so you can feed the Garmin DriveSmart 70LMT some vital information via live services. The new Smart Notifications feature allow allows the device to retrieve certain notifications issued by compatible smartphone apps.

Another good reason to get the DriveSmart 70LMT over any Garmin Drive device is the superior touchscreen. Because the touchscreen is made of glass and is capacitive, you can perform the familiar pinch gestures to zoom in or out of the map. It is also more responsive.

A lot of the Garmin nuvi signature features are present in the Garmin DriveSmart 70LMT. This includes the millions of Foursquare points of interests included in the device with full lifetime map updates so these locations stay fresh and It covers all of North America. It is still compatible with the same Garmin GC 30 wireless backup camera. Lifetime traffic is onboard too

• Smartphone notifications are quite cool.

• No other 7-inch alternative from Garmin available.

From a bird’s eye view, the Garmin DriveSmart 70LMT doesn’t look like a substantial improvement over the high-end Garmin nuvi devices. But that’s because Garmin nuvi devices were very good to begin with and it looked like innovation was running dry. The Garmin DriveSmart 70LMT is the company’s best and biggest attempt to bring GPS devices to the modern world.