When it comes to hiking or simply exploring the great outdoors, a smartphone or one of the many handheld GPS devices can suffice. However, hunters will need something a bit more focused. You can search through all the hunting apps in your smartphone’s online marketplace and likely end up with a lackluster experience. With regards to other handheld GPS devices, you don’t want to be paying for features that you won’t be using. Fortunately, Magellan is here to help with the Magellan eXplorist 350H.

About the Magellan eXplorist 350H

The Magellan eXplorist 350H is a special addition to the Magellan’s eXplorist family. Its $249.99 price tag predictably puts this model between the Magellan eXplorist 310 and 510. Both those models are general-purpose handheld GPS devices but the letter “H” at the end of the 350 model number stands for “Hunter”. Magellan is even selling a special bundle that includes Gerber Myth Pocket Folder Knife for game dressing purposes.

Comparison with the Magellan eXplorist 310 and 510

Announced in 2013, the Magellan eXplorist 350H can be considered an evolved version of the cheaper Magellan eXplorist 310 because it has the same button layout and adequate 2.2-inch QVGA display. You can navigate the menus using the center directional stick, menu and back buttons or zoom using the other two buttons when in map view. Unlike the Magellan eXplorist 510, the display is not a touchscreen. The brown camouflage waterproof casing really makes the device stand out and gives a pretty clear idea that this eXplorist device is for hunting.

Don’t consider the eXplorist 350H as solid replacement or stylish version of the 310 because some parts of the user interface have been remodeled to suit hunters. The home screen has “Hunt” as the first option although the “Hike” option just below it shows that you can still do your usual hiking activities with this device.

The “Hunt” feature will launch the Hunting Trip mode where the Magellan eXplorist 350H will record your activity on the map. While your scouting is underway, you can create waypoints at any time. Setting the waypoint is actually the coolest part because of the new Prey Tracking category where you can choose from one of the several hunt icons available. Some of the icons represent animals like bears and deer while the others are useful hunting symbols like blood trails and bedding areas. Field notes can optionally be added to these waypoints too. After your session, you can review the stats including the distance and elevation while checking out the waypoints you made on the map. Saved trips have the same GPX file format as other Magellan trips. In the same Hunting Trip mode, you can also plan a trip which feels more like planning a typical route where you can enter coordinates or drop a pin on the map.

The eXplorist 350H is preloaded with special hunt and topo maps that show vital terrain feature data including contour elevations. In order to make sure that you are within the GMU and WMU hunt zones, the Magellan eXplorist 350H will make a notification when you step out of the boundary. It is also possible to learn the best times to hunt in the area based on the moon phase and positioning of the sun. Finally, you will get a free subscription to DigitalGlobe for a year. DigitalGlobe basically provides you with useful high-resolution satellite imagery which can help you make better hunting decisions. The eXplorist 310 supports DigitalGlobe subscriptions too but you have to pay about $20 just to try it out for a year. 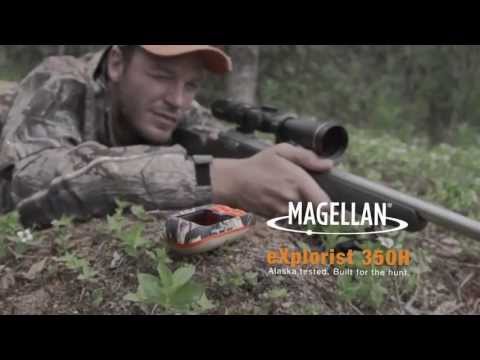 Outside of the hunting functions, the eXplorist 350H very much acts like a 310 so there is no need to purchase a different GPS device if you want to do some non-hunting outdoor activities like geocaching. In addition to the preloaded topo maps, the Magellan eXplorist 350H also comes with 2D roadmaps of places all over North America. Detailed maps outside North America are not included though so buying an eXplorist 310 instead still has an incentive if you are the traveling type.

The eXplorist 350H performed admirably under the harsh conditions in Alaska. The SirfStarIII chip is highly energy efficient but has high enough sensitivity to accurately track routes and breadcrumbs even when the screen is off. Battery life lasted a good 18 hours and all you need for extra juice is just 2 AA batteries.

• The free year of DigitalGlobe satellite imagery makes the handheld less expensive than it really is.

The Magellan eXplorist 350H might look a bit pricey for what you get but similarly-priced GPS handheld devices either offer very little to no hunting features. This is the hunting GPS device to beat.