MeritLine
Home How To June 2021 – Best Ways To Install Android on Switch? | Hikate...

Nintendo is ruling the gaming world with its smashing hit gaming consoles. Its latest console has been sold massively and has gained huge consumer popularity. However, a group of developers has taken a step further with the Nintendo Switch hardware so as to operate a fully-functional Android system on it. Sounds interesting? Want to know how you can install Android on Switch? Looking for a GUI Based Nintendo Switch aka Hikate Switch?

Well, you are in the right place then.

Previously the installation of Android ROM for Nintendo meant flashing of the native hardware. But now a new achievement has been made in this field and you can flexibly move between the Android and Switch hardware by just using a microSD card.

This article will cover What is a Nintendo Switch, How to Install Android on Switch, and Different Apps on Nintendo Switch that are useful other than gaming.

Check out the entire process and don’t forget to share your thoughts with us.

Why Install Android on Switch?

Tired of searching Nintendo Switch Android? Running Android on Nintendo Switch has many reasons behind it, and they are often subjective. While early adopters always see to do something outside of conventional thinking keeping the limits of the hardware in mind. This is because it simply can.

No doubt there are many advantages of having complete access to a broad range of features and applications. And one such app is Netflix which the Nintendo users have been missing on the Switch. The app is not available on the new console, however, you can access it on the Wii and Wii U console. And so if you have an android system you can enjoy your Netflix favourites on the Switch.

Apart from this, you can also enjoy several mobile games that are on Android but not available on Switch. You can have access to these games as well. However, you won’t be able to play games that require features of a smartphone like GPS and camera.

The process to run the Android system on the Switch requires the Nvidia Tegra X1 ARM processor of the older console. As the flaw of this processor has been fixed in the newer consoles you will require a console from 2017 or 2018. The version after 2018 will not work. Also to use Android you will require a MicroSD card. This method is safer with the least side effects than the previous attempts.

How to Install Android on Nintendo Switch

Step 2- Now you can pick some image that is close to the size of your microSD card. Here you can also make use of an image that is smaller than your SD card so that you have some space remaining for the later downloads.

Step 3- Now write the image to the SD card. And let Etcher handle the compressed image, do not extract the image.

Step 4- Next download the GApps from OpenGApps for android 8.1 and use ARM64. Now load the file on your SD card’s first partition.

Note– Make sure that you have used an empty SD card, otherwise the file will be overwritten on it.

Step 5- Download the “Shield-ifier” zip file and copy it on the SD card as well. This is important as your Switch will identify it as Nvidia Shield TV and subsequently install the Nvidia app.

Step 6- Next load Hekate and then by holding the Vol+ button boot to TWRP. And select the Android config.

Step 7– Now mount /system first in TWRP. And flash the GApps zip. If you wish you can flash other zips as well.

Step 8- After you install GApps, TWRP offers to wipe the cache//Dalvik. Do it as required. You can also access the following video to learn how to flash zips in TWRP: 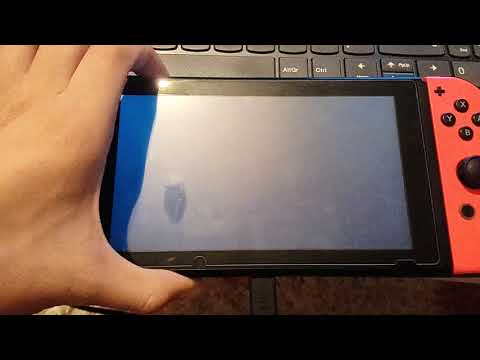 Step 9- Next reboot to Hekate. Finally, boot into Android

That’s it. You can now complete the initial setup and keep the Nvidia app updated. For further updates visit the Play Store.

How to Return to Switch OS

As we are using an external microSD card, the Switch hardware remains untouched and you can return back to the hardware without any issue. Turning off the system should return the Switch to normal. This is necessary as you will have to boot the system into Android very time you install it using the method given above. And so after power down, you can go back to Switch using Android whenever you want.

How To Run Android on Nintendo Switch

Here’s how to run Android on the switch- You can boot into the microSD card after it’s prepared whenever you like. Removing replacing the microSD card with one which was maybe used for Switch games, don’t worry as it will not have any impact on your Nintendo Switch.

However, when you want to install Android on the Switch, there are some notable limitations that you should keep in mind-

We can do more on Nintendo than just gaming!

Here are 5 amazing Nintendo Switch Apps facilitate you with their excellent features:

Is LineageOS 15.1 For Nintendo Switch Stable? How About Hikate Switch?

The performance and functionality of LineageOS 15.1 based on the operating system of NVIDIA Shield TV are pretty solid. Also, the Android ROM that was made publically available was the custom ROM for the Nintendo Switch. It is an extremely stable lineage that brings together all the functionality that you require over the Shield TV.

If your Switch is running on the LineageOS 15.1, then you are free to use your Nintendo Switch in both dock and handheld modes.

The LineageOS 15.1 is not perfect and the developers have reported some known bugs. The most popular ones are:

On the other hand, you can also launch Atmosphere CFW (if needed) with the help of Hikate Switch.

All you have to do is follow these steps-

Hekate will now boot the Atmosphere in just two mins.

And so guys, this was all about how you can easily install Android Nintendo Switch. If you don’t have the LineageOS 15.1 then don’t worry, you can still enjoy all the apps and features of Android on your console. Also let me tell you once again that since this is not officially endorsed by Nintendo, there are still some risks involved. So be careful before you take on this project.

WhoCallMe Review: Most Reputable Online Platform to Figure out Who Called Me From This Phone Number

The Traders Union Weighs In On The Baba Stock Forecast

5 Ways to Increase Sales for Your Event