ALT Balaji is a part of the Balaji Telefilms a leading production house owned by Ekta Kapoor. So if you are planning to ditch the cable channel and start streaming shows on the digital platform then just subscribe to ALT Balaji and enjoy these shows.

Viewers are going gaga over digital content, and here are a few Alt Balaji’s Indian Adult Web Series, which are must watch! Some of these are adult web series as well, only 18+ you see! 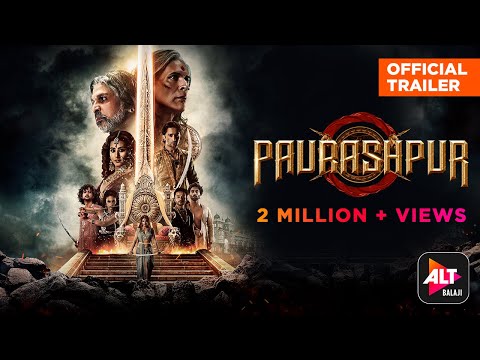 The first season of this romantic web series left the viewers wondering whether the Sameera and Veer will stick together. The series did complete justice to showcase the pain a couple goes through during a heartbreak. As the two tried to get over the baggage of their past relationship, the viewers are waiting to see the chemistry between the two in the next season.

Want to know what happened next between the two, then go and watch it now. The second season of Broken but Beautiful has been released by ALT Balaji on 27 November.

Fittrat is a web drama series that can be best described as a tale of love, friendship, passion, loyalty, ambition, and betrayal. The story is about a girl Tarini Bisht who is a gold digger and is on a quest with her rich BFF, Amy to find a ‘honey with money’. However, she is so unlucky that veer, her friend’s fiancé falls for her. And what follows is a complicated journey of love and friendship, but it’s not her end.

It is 15-episode long series starring Krystle D’Souza, Anushka Ranjan and Aditya Seal. With Fittrat, Ekta Kapoor brings high quality, classy and gripping storyline for the viewers. Be a part of Tarini’s journey where she picks up her dreams and proves to be her own hero.

If you haven’t watched Apaharn, then it should be on the top of your list right now. Shot in the city of Uttarakhand, the show stars Arunoday Singh, Mahie Gil and Nidhi Singh in the lead role. Apaharan was released when Sacred Games and Mirzapur were ruling the hearts of the Indian audience. But the show managed to become successful, all thanks to the craze for thriller and crime series.

The show is about Rudra Srivastava, an inspector who agrees to kidnap a girl at her request only. I guess this line is enough to increase the excitement. And so as the story progresses, he discovers that he has become a part of a deadly conspiracy. Will he be able to come out of this web? Watch it yourself to know.

An honest effort has been made in making each episode, packing it with mysteries and thrill. I’m sure you would be glued to the edge of your seat once you start watching the series. Discover some unknown facts about Bose and his journey with this thriller.

Boss is not only the Baap of Special Services but it is also the baap of stars. The show has a glamorous and stellar lineup of actors including Karan Singh Grover and Sagarika Ghatge. This Hindi web series is packed with drama, romance, thriller, and mystery. The first season of Boss is 10 episodes long and is directed by Ankush Bhatt.

Shot in the beautiful city of Shimla, Boss is a story of an undercover detective who joins the Task Force of Shimla. As his style is unusual and his ways are strange, he crosses path with the other officer many times. However, as he is the BAAP, his crime-solving leads to effective results. You can binge-watch it for sure.

Are you a Student of the Year fan? Do you like high school romance? If yes, then here is a web series that will give you all feels of the Bollywood flick SOTY. Puncch Beat, directed by Suyash Vadhavkar stars some fresh and young faces like Priyank Sharma Harshita Gaur, Khushi Joshi, and Siddharth Sharma.

Rosewood High is a premium institution that follows only one rule which is- obey all rules. The story is a high school drama that becomes quite thrilling as the students take up different challenges. So who will be the real winner, binge watch it this year to know?

The handsome hunk of TV soap opera, Shabbir Ahluwalia has entered the digital platform with Fixerr. If it has to be described in one word, then it will be Paisa Vasool. So the fixer of the show makes all things happen, puts things into force and carry out the dirty deeds for the famous, rich and glitzy Mumbai. He plays the game, to end it.

With some outstanding actors like Tigmanshu Dhulia, Karishma Sharma and Mahie Gill the show is definitely a must-watch. The director Sohum Shah has done a great job, so don’t wait and watch it now.

We all know that college life is just not like the ones shown in serials and movies right? Medically Yourrs on ALT Balaji is one such show that will take you back to your college days. The plot of this web series starring Shantanu Maheshwari highlights the struggles of medical students, complex relationships, and the undue pressure of clearing exams in the quirkiest way possible.

I’m sure this series will make you a little nostalgic about your college time and take you on an emotional rollercoaster.

After Devdas, and Dev D, here is a modernized version introduced by Ekta Kapoor and Shobha Kapoor by the name Dev DD. The show focuses on topics that people refuse to speak about like feminism, homophobia, sexism and a lot more. There is a girl named Vicky, a girl who is perfect to be frowned upon by society. And then she meets Parth aka Paro of the show, falls in love and then her heart is broken.

With Dev DD, the makers of the show are trying to break the stereotypes associated with Indian females. You can watch all the eleven episodes on the ALT Balaji app.

As I said that even Netflix and Amazon are trying regional content, how can ALT Balaji stay behind? Hero Vardiwala is a new web series directed by Mahesh Pandey. It is an original Bhojpuri action series that has 13 power packed episodes.

So if you are a Bhojpuri fan, then do watch this series. It features the superstars of the Bhojpuri film industry like Nirahua and Amrapali Dubey. The story is about a daring and honest IPS officer and a corrupt politician. It’s definitely one of a kind entry on any OTT Platform.

Baarish is a simple and sweet love story of two complete strangers. The two characters, Anuj and Gauravi come from two different backgrounds, both cultural and economic. Their families arrange their marriage under transactional circumstances. However, the two fall in love, which seems to be their destiny.

The paring of the show is pretty unique. It features Sharman Joshi and Asha Negi as the protagonists. Also, as the name of the show is “Baarish”, rain plays an important role in writing the destiny of the two. Sounds filmy?  But it is quite endearing.

The Great Indian Dysfunctional family is an Indian drama web series starring Barun Sobti and Kay Kay Menon. The story revolves around the relationship between the two brothers and their families, their heartbreaks and breakdowns. The show has an engaging storyline, and you wouldn’t miss the old soap opera feeling.

It’s an easy-breezy show that you can enjoy with your friends and family.

Haq Se is another Indian Hindi web series that you will find on Ekta Kapoor’s OTT platform ALT Balaji. The show is set in the picturesque state of Kashmir. It is loosely based on “Little Woman” by Louisa May Alcott.

Produced by Karan Raj Kohli and Viraj Kapur, the story is about four sisters who struggle to live their dreams while the religious and political tension keeps mounting in the valley. This is definitely a must-watch for you if you like slow-paced, heavy drama series with extravagant dialogue delivery. And of course, then there is Rajeev Khandelwal, I think a reason is enough to binge-watch.

With this new web series, Shweta Tiwai is making her digital debut. Alt Balaji’s new drama series Hum Tum aur Them is a story about a second chance at love. Two single parents, Shiva and Yudi give love one more chance and when they try to maintain their relationship, their teenage children deal with their past and try to fit into the new lives of their parents.

With this series, you will also be able to see some new faces. However, if you are a Tik-Tok fan then you would be familiar with them. The show also stars Akshay Oberoi, Aashika Bhatia, Bhavin Bhanushali, Gautam Ahuja and Trupti Khamkar. Will they be able to convince their children? Catch up with all the drama on ALT Balaji.

Home is one of the classic family drama that couldn’t have got more real. With an amazing cast which includes Supriya Pilgaonkar, Annu Kapoor, Amol Parashar, Chetna Pandey, and Parikshit Sahni, this web series highlights the Indian middle-class family and their real-life struggles against the system.

Just like any other Balaji Soap opera, Home too focuses on values and happiness that middle-class Indian families find in small things. The central theme of the story is the fight of an archetype family when they receive an eviction note. Don’t miss out on this home and the heartwarming performances by the actors.

This next web series is the one that most of you will relate to. The story is about four friends who have just passed college and are thinking about their future. Amidst all the worries and deep thinking, one of them comes up with a crazy business idea. They decide to begin an all-night contraceptive delivery service.

As they start their journey of building a business they deal with lots and lots of problems. It’s a sweet funny story of friendship that will bring a smile on your face. Every now and then an idea hits our mind, but we don’t go ahead with it. What was that one business idea that came in your mind as crazy as this one?

CyberSquad was released in 2017, however if you haven’t seen it yet then you can stream it on ALT. the show has an interesting concept where four teenagers aka the Cyber Squad try to blur the line between the offline and the online worlds.

The series tells the story about four friends- KD, Rocky, Uzi, and Tia who form a squad and help the police track the most dangerous criminals from their Cyber-den. These badass teenagers are smart and intelligent trying to make the world a better place with their high-tech skills.

This adult web series is surely a hit among the masses. It’s a bold move by the makers and Ekta Kapoor to bring out the fantasy prevalent in rural India, and how they are considered a taboo.

I won’t give away any spoilers, but you can check out the five episodes where these characters explore different aspects of sexuality and sexual relationships.

Currently, Alt Balaji is leading amongst the OTT platforms, hosting lots and lots of different genre web series. If you are bored with the regular soap opera, then you should surely watch these web series at ALT Balaji to refresh your mind.

How to Install Ares Wizard on Kodi [4 Updated Sources]

Things To Know If You Want To File A No-fault Divorce...

His Dark Materials Season 2 Release Date| Will it be Delayed...

Bitcoin or Altcoins: Which makes the better investment?

Investment strategies powered by new technologies: how a stock and crypto...

5 Benefits of Working With a White Label Digital Marketing Agency