Review
Home Entertainment Nitty-Gritty: Analyzing the Grand National’s Most Important Fences, and Where the Race... 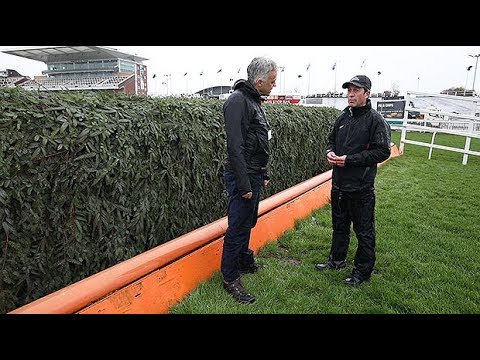 Saturday 9th April is Grand National day. The famous Aintree circuit will once more provide a grueling challenge for the entry list of 40 – where both jockeys and their horses will be tested to the max. With two laps and 30 fences to jump, very few complete the course, making it impossible to predict amongst those who choose to bet on horses. And even for those that don’t, the Grand National is famed worldwide.

What sets the Aintree centerpiece apart from other National Hunt races is the fences – which are higher than the other ones found up and down the country – with the lowest standing at 4ft 6in and the tallest at 5ft 2in. Many of the fences have become iconic in their own right and are a part of Grand National heritage.

Read on as we take a look at the challenging six.

Formerly known as the first brook, Becher’s Brook has an incredible backstory. It takes its name from a former jockey – Captain Martin Becher – who raced in the inaugural running in 1839 and fell at the fence. He lay in the brook while the rest of the field jumped past before remounting his horse and carrying on – until he was dismounted at the second brook. It’s believed he commented how filthy water tasted without the flavor of whisky.

The drop at this fence often catches riders by surprise, as the landing side is between six and ten inches lower than the take-off side. Due to this, Becher’s is a popular vantage point, which is often described as “jumping off the edge of the world.”

At 4ft 6in, this fence is the smallest on the circuit – but in 1967, it caused a problem for the field. The fence was renamed in 1984 in honor of horse Foinavon, who won the National at odds of 100/1. He was the only horse to avoid a melee on the second circuit.

A loose horse, Popham Down, who had unseated his rider earlier in the race, veered dramatically to the right side of the fence, knocking into Rutherfords, and a pile-up ensued. At least five horses hit the ground and caused chaos – with some even running in the wrong direction!

However, Foinavon was some way behind, and jockey John Buckingham found a narrow gap on the outside, jumping the fence cleanly. While the unseated jockeys remounted their rides, Buckingham and Foinavon were a good 30 lengths clear and went on to win comfortably.

The Canal Turn is notable for its sharp left-hand turn that must be negotiated as soon as the horses have jumped the fence. In earlier renewals of the National, it was not uncommon for horses to land in the nearby Leeds & Liverpool canal, and while there was previously a ditch before the jump, it was filled in after the 1928 race.

Over the years, many a pile-up has taken place at the Canal Turn – horses that refuse the jump can then interfere with the other runners, while jockeys who decide to cut the corner can be unseated at the turn.

Formerly known as the second brook, Valentine’s Brook has since been renamed in honor of a racehorse. It was back in 1840 that Valentine jumped the fence hind legs first.

Rumour has it that the owner of Valentine, John Power, had wagered that his horse (at odds of 100/4) would be the first to complete a circuit, and he had established a good lead in the race. But when he reached the second brook, the horse refused and hind legs first, corkscrewed over the fence. The jockey remained in the saddle, and while his rivals made ground, Valentine did indeed lead at the end of the first lap – however, he was the third of three horses to finish the race.

Positioned in front of the grandstand, The Chair is the tallest fence on the National circuit, at 5ft 2in. Not only that, but the horses must negotiate a 6ft ditch that precedes the jump.

The Chair gets its name from the chair, which once sat alongside the fence, and from which a distance judge would sit and watch the race. In its earliest days, the judge would record the finishing position from ‘The Chair,’ and any horse that had not passed him before the previous runner passed the finishing post was known as a non-finisher. While this rule was abolished, the monument in which ‘The Chair’ stood remains today.

Consequently, the fence was previously known as the Monument Jump, and it is one of two fences that horses and their jockeys must navigate once.

The second fence to only be navigated once is the Water Jump, which marks the end of the first circuit. In very early renewals, this jump was actually marked by a stone wall, which was 16ft wide – but was replaced by water in 1841. At 2ft 6in, it’s the smallest jump on the course.

Common Variations of Blackjack you should know about

Free Spins: What Are They, How to Get and Use Them

How Telehealth is Changing Healthcare Across the Globe

5 Things You Don’t Know About Bingo

The World Series of Poker (WSOP)

The 5 Perfect Occasions for Giving A Watch As A Gift

What Are Trading Breakouts? – Using Them in Your Strategy