Are you a gaming freak? If yes, then, you must be a big fan of Smite. The game is so popular among people from various age groups. You know about the gods too. What are gods actually? These are the characters that are considered as the gods in the game. They believe in different mythologies. The game is amazing to play at any time of your day. Here in this article, I am going to tell you about the best Smite gods.

But before that, we need to find answers to some of the most basic questions related to the same.

It is a MOBA or multiple online battle arena game where a map is given and players fight according to rules on that map only. Along with each of the players, there is one character or god appointed. These characters have different abilities.

The game is developed by Hi-Rez Studios. The game is free to play. Have you ever played Dota 2 and League of Legends? The game is similar to these ones in terms of plot and basics. The game is rapidly increasing when it comes to popularity.

Actually the game is better and different with other games as you can use the W, S, A, D keys to control your characters, unlike the other games where you need to use mouse buttons to play.

How many gods are there in Smite – What are Smite Gods?

See, the game is based upon mythology so the characters are called gods. Each of them has different beliefs as well as their abilities.  The characters are related or bound to real-world heroes.

The experience is really very important to this game as you can promote the characters after having good skills and practice. After killing the hostile characters or minions, you will get gold which is very important in the game.

Is the Smite Game free?

Yes, it is absolutely free of cost to play this game. You do not need to pay a single penny. But, within the game, you will be needing some in-game currency to buy some stuff.

Also, in the game, there is an “ultimate God Pack” which allows you to pay one time only and it locks all the gods for the game for past, present as well as future.

Favour and Gems are the in-game currencies. Favour can be earned within the game by playing well and you can use it for renting and unlocking gods. Gems are used to purchase the cosmetics for your unlocked gods and you can earn them by participating in giveaways, buying them, or getting them through promotional codes, etc. 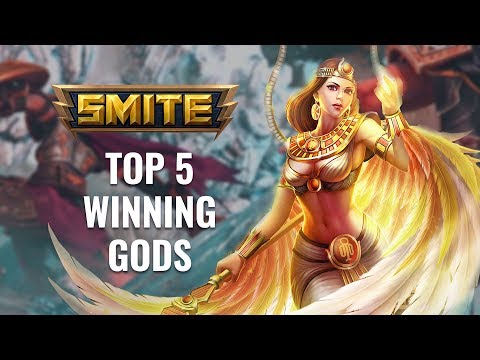 So let’s have a look at the top 15 Smite Gods that you can depend on to give your opponents a tough fight.

This smite god specializes in damaging the sites with the single targets only. Coming to the abilities, this character has Dragon Call, Wild Storm, King of the Eastern seas and Water Illusion. Due to these abilities only, he has become one of the most loved as well as the top gods in the game.

This god is famous for its ability to damage huge sites easily. The skills are awesome and never fail to impress you. He has the Radiate, Eclipse, Vortex as well as the Frostbolt skills in the game. The effects of these skills are huge and extreme.

Crowd control and extreme mobility are the specializations of this character. It is powered by storms and wind. This character is absolutely tricky and you need to try really hard to master the same but comes with great skills like Jet Stream, Wind Siphon, Typhoon and Storm Kata.

The next in our list of best smite gods is none other than King Arthur. King Arthur is a powerful warrior with various abilities like crowd controlling and high area damage. The character is not less than an asset in the game.

With such strong abilities like Lash, Incense, Nimble Strike and Destruction, he is enough to damage any enemy in front of you. He comes with a high-damage output that can be sustained later. But, along with this character, you need to use your skills very smartly.

The speciality of this character is that it takes a single target to make the heavy attacks. The most amazing abilities are Butcher Blades, Eat Minion, Take Down and Regurgitate. You will definitely not regret having these skills in your gaming arena.

There are so many reasons due to which this character is considered as one of the best smite gods. He has a high defence ability and he can heal too. This healing ability makes it one of the best gods that can survive for long in the game.

The best characteristic of this god is, his mobility is awesome. The other major features include Combat Dodge, Radiant Glory, Fatal Strike skills and Shield of Achilles. You just cannot ignore this god in your game.

Do you want to master your battlefield? Go with this god called Ne Zha. Flaming Spear, Universe Ring toss, Wind Fire Wheels and Armillary Smash are the key features that will help you to give your best in the game. You are allowed to go with the best kind of crowd control with this one.

This is the best character if you want to go for the skills like Prana Onslaught, Mystic Rush, Hand Shadow Fist, and an Overhead Kick. so, if you want to level up your game with such strong skills, you must go with this one.

Next to our list of best smite gods is Erlang Shen. This god is armed with high damage output and can do fast attacks. The special abilities are 9 Turn Blessing, 72 Transformations, Pin and Spot Weakness.

Do you want a god who runs and attacks fast? Then, this one’s for you. Yes, Ah Muzen Cab comes with excellent abilities like Honey, Swarm, Hive and Stinger.

This god is equipped with stuff like Atlas of the Yellow River, water cannon, Crushing Wave and Water Spout. In short, you can say that this whole of the power is based upon the water power. The god uses water to control the crowd and perform high area damage.

The speciality of this character is hunting down the foes. And, you just cannot have high mobility. This one is actually good in the game and can do much better if you have some good skills.

The last is, Jormungandr. It is powerful and a ranged attacker which is enough to get good control on your battlefield. The abilities are Consuming Bellow, Venomous Haze, Submerge and The World Serpent are amazing.

These are the best of the smite gods that you must choose while playing your game. All of these have different characteristics and specializations that cannot be ignored. It is not wrong to say that the smite gods have contributed a lot in its huge success and popularity among people.

How to Get the Best From Game Art Services?

How to Fax by Using Google Voice?